The Rip Chords were an early-1960s American vocal group that placed top 100 hits. This is the historical story of the original group and members. After Ernie Bringas and Phil Stewart signed to Columbia records with producer Terry Melcher, their name was changed from The Opposites to The Rip Chords.

This group came to be associated with the hot-rod and surf genres of that day, although their first single (“Here I Stand”) did not reflect those styles. They recorded for Columbia Records in Hollywood from 1962 to 1965. The group placed five (5) singles on the Billboard Hot 100. They are best known for their number-four single: “Hey Little Cobra” – one of the best-selling hot-rod songs of all time.

The photo below is of the original and founding members of the Rip Chords: Ernie Bringas (left) and Phil Stewart (right).  It was taken during their first concert at the Hollywood Palladium on Dec 9, 1962. The Rip Chords were formed by Ernie and Phil and, at the beginning, they were the only people in the group.

A signed picture of Doris Day (below) was presented to Ernie Bringas in person when he met her!  Doris Day was the mother of Rip Chords Columbia Records producer, Terry Melcher.  The Rip Chords was Terry’s first record producing opportunity at Columbia.  Ernie, in his book, Mexican Roots, American Soil: A Quest for the American Dream, published in 2016, recalls a good memory of driving to Doris’s home to fly to a concert with Terry.

The first Rip Chords song released by Columbia Records was “Here I Stand.” The song featured only the voices of the original Rip Chords, Ernie and Phil. “Here I Stand” rose to be a top 20 hit in many major markets including Los Angeles, Miami, and Chicago. Ernie sang the lead and several falsetto parts (produced by Terry using multiple overdubs). Phil sang the base. Ernie received this Christmas card from Terry in 1963. Listen to Ernie’s multiple vocal parts as you view this card (below):

On “Gone,” Ernie and Phil were joined vocally by Bruce Johnston, a good friend of Melcher.  Ernie, Phil and Bruce were the only three voices on this recording.

Johnston’s fantastic Beach Boys-oriented falsetto, complimented Ernie’s Four Seasons type falsetto.  The interjecting falsetto throughout belongs to Johnston (who later became a member of the Beach Boys). Ernie sang the lead on this song, as well as one of the falsetto parts along with Johnson.  Phil carried the low-end parts.

This image of a newspaper clipping shows how Ernie and Phil successfully went from an A Capella choir in high school to gaining a contract with Columbia Records. The article talks about their hit single “Here I Stand” and the flip side song “Karen” which was written by Ernie and Phil.

The flip side song of “Here I Stand” is called “Karen.”  You’ll hear Phil singing the lead and Ernie singing harmony to the lead:

Best Of The Rip Chords – Back Cover of Sundazed Release

In 2006 Sundazed released a “best of” CD that corrected much of the information about The Rip Chords. It correctly stated:

NO GROUP EPITOMIZED THE SUN-SOAKED CALIFORNIA SOUND BETTER THAN THE fabulous Rip Chords… Led by legendary producer Terry Melcher along with future Beach Boy Bruce Johnston and ace-vocalists Ernie Bringas and Phil Stewart, these long-board big-guns left an indelible mark on the surf’n strip sounds of the ‘60s….

Ernie is on the right side of this CD picture.  Phil is on the left.  The two guys in the middle (Rich Rotkin and Arnie Marcus) toured with group but never recorded with the Rip Chords. This CD re-release was mastered by Bob Irwin of Sundazed Records, with historical annotation by West Coast music gurus Stephen McParland and Jud Cost.

Remember these advertisements in your Sunday newspaper for the Columbia Record Club?  See that the two Rip Chords albums were included!  Ernie signed a recording contract with Columbia in 1962, along with Phil Stewart his singing partner, and still receives royalties for recordings of the original Rip Chords! The touring Rip Chords did not receive such royalties because they were the marketing arm of Columbia that toured instead of recording.  The second Rip Chords album is in the top left corner, and the first album is just above the bottom right side.

The RIP CHORDS recorded from 1962-1965 at Columbia Records in Hollywood, California.  This post card (below) is a memory from Ernie of those long-ago recording days.

The back of the post card states:  “Columbia Broadcasting System, Hollywood, California.  Here in the Hollywood headquarters of CBS, the visitor has opportunity to observe modern radio production.  The master control, sound effects, and exhibition rooms may be viewed, as well as rehearsals ad broadcasts by many stars. 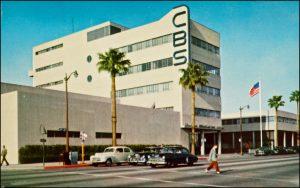 The picture below is entitled “Hamming It Up.” Here, Ernie Bringas kidded around and showed off the rock ‘n’ roll style at a Youth Fellowship banquet.  He was the speaker at this banquet, and was in demand as an original Rip Chord.  That pic was taken in January 1965. 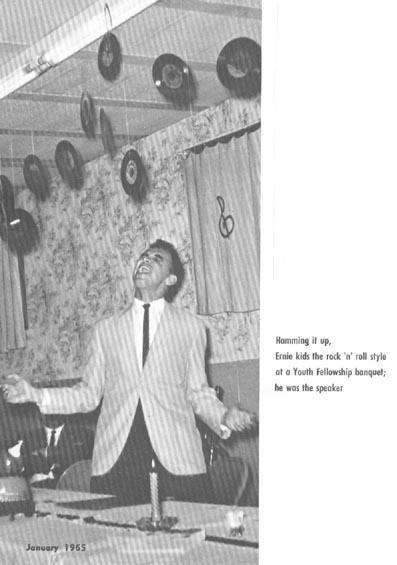